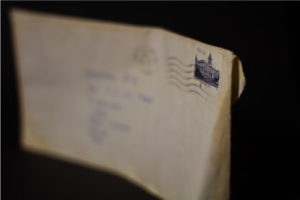 She had just put the grocery bag on the counter when she noticed the envelope.  It was her name written in her husband’s hand.

Curious, she opened it and found a four-page letter.  But very little mattered past those first three words.

She read them again.  She felt a flush begin to spread from the back of her neck, across her face and into her chest.  Halfway through the first page, she collapsed into the kitchen chair, leaning heavily on the table.

Her heart pounded and her chest grew tight and she continued to read all his justifications for abandoning their 10-year marriage.  Ten years of trust and her whole world evaporated with every word.

Later, she tearfully told her pastor she never had a clue.  Not a word of conflict preceded his packed bags and lonely letter.  When confronted, his only response was, “I could never tell you anything without it blowing up into a big deal and I just didn’t want to fight.”

Some might say that if she had been more perceptive, she would have seen that he had been distant for a while.  Every night for the past year he had come home later and later.  There were always good excuses.  His business trips got longer and longer, but she attributed it to his successful business.  But sadly, she never suspected a thing, he never expressed his unhappiness, and in short, she never saw this one coming.

Marriages do not die overnight. They are usually slowly killed off.

People get older. They change through age and experience. Their desires and wants change.  There is a natural tendency in marriage to “outgrow” each other.  Passions get cold.  Familiarity can breed contempt.

“Pastor, we are leaving the church.”

When he saw the letter on his desk, he had a sinking feeling.  Plain white envelopes with handwritten addresses left on pastor’s desks, usually spell some sort of rejection.

He sank into his chair as he tried to process the words. Hot tears filled his eyes and spilled onto the page.  His mind raced, his heart pounded. He read it again and again. He searched for some hope, but experience told him the cold truth: Once they write the divorce letter, they are gone.

“We are leaving…” is usually as far as it really matters to the church. Oh those words are typically accompanied by several pages of justifications and reasons, but like the rejected bride, it rarely matters to the ones left behind. It simply means “I am rejecting and divorcing you.”

If you think about it, such a letter only serves to make the one leaving feel better about themselves. No rational person could really expect their letter to bring about change.

Who has ever accepted, “By the way, now that I have decided you are unworthy of my further devotions, and I have officially dumped you, let me offer you my advice on everything that is wrong with you.”

What jilted lover would heed such advice?

And yet people who make a decision to abandon church relationships often feel better about themselves because they write their list of grievances on the way out the door, (and sometimes share them widely).

It’s hard to deal with marriage counseling and change after the divorce.  Once you’ve closed the door in the relationship, you give up the right to speak into the life.

But rather, stay in the relationship!   How much better to share some time in which you assure leaders of your commitment and love, but then begin to honestly address your concerns. Some of your feelings may be valid. Many of them will not be.   You may be heard, you may not.

The same is true in the marriage.

Churches must learn how to process conflict.  Likewise, in the home, knowing how to have a good fight is critical to successful marriage.

You may say, “But Jon, church relationships are not the same as a marriage.”

That’s true. There are some differences. But it was Paul the apostle who told us that the relationship between husband and wife is the same as Christ’s relationship to His Body.  (Eph 5)

Significantly, both your marriage and your connection to a local body of believers are relationships of covenant.  In the church, our body is  united in the New Covenant of Christ and our mutual covenant together.

Covenants should not be broken easily nor lightly.

How to have a good church fight:

Learning how to handle conflict is a key to staying together.

About the Author: Jon

Jon Hamilton is a broadcaster, author, and minister. He serves as President of Christian FM Media, which provides creative content to more than 200 Christian radio stations across the US and overseas. A father of eight, Jon and his wife Tammye frequently speak at conferences and churches.