Pastor Bernie stood before his flock that Sunday with a mandate he KNEW was from God.  The situation was critical.  The enemies of the Gospel had to be directly challenged.  The body of Christ needed to be rallied to action in the face of the many dangers assaulting the Christian faith.

Deep emotion was apparent on his face as he stepped to the pulpit. He looked out across the audience, and after a thoughtful pause, he began to address them.

“You MUST know that we are living in a time period of God’s judgement.  The enemy of mankind has caused his breath of corruption to fly over every community; Everywhere we look we see nothing but unpunished wickedness. The laws of men or the laws of religion are no longer able to hold back the depravity of and the triumph of the wicked. The demon of heresy has taken possession of the seat of truth.”

A scattered few sounds of “amen” whispered across the congregation.  Pastor Bernie seemed to respond with more volume and intensity.

“Oh, you who listen to me, please move quickly to stop the anger of Heaven!  Don’t just ask for God’s blessings and make useless complaints about the problems, and stop putting on your sackcloth and mourning about the problem.”

“The time has come to put on real armor!  The noise of war, the dangers, the work, and the tiredness are things that God now requires of you!   Quickly repent of your sin of allowing the unbelievers to have victories!  And the deliverance of the holy places will be the reward you receive for your repentance!”

He gripped the pulpit with both hands and leaned forward… as if to stare each man directly in the eye.

“If I told you that an enemy had invaded your homes, your cities, your lands; had sexually assaulted your wives and your daughters, and committed blasphemy in your church—which among you would not run for his weapons? Well,  ALL these horrible things, and worse, have fallen upon your brothers, upon the family of Jesus Christ, which is yours.”

“Why do you hesitate to take action and fix this??   Why are you slow to revenge these outrages?

Will you allow the enemies of Christianity to sit around peacefully and be satisfied knowing the harm that have done to Christian people?”

Tears were now streaming down the pastor’s face. His voice quivered.

“Get your weapons ready now!  Let a holy anger move you to fight, and let the Christian world resound with these words of the prophet Jeremiah, “Cursed be he who isn’t willing get to get his sword bloody!”

It was obvious that great conviction was falling on the crowd. Women wept. Every man was on edge.  Pastor Bernie solemnly concluded,

“Don’t think that because God is calling you to defend the faith that his hand has lost power.  He could send twelve legions of angels! He could breathe one word and all God’s enemies would crumble!”

“But God has chosen to call on YOU, the sons of men, to open up for them a pathway to experience his mercy and goodness as you avenge His glory and His name.”

“Christian warriors, He who gave His life for you, today demands yours in return.”

And so they gave their lives.

It is estimated that 20,000 Frenchmen responded to that impassioned, thoughtful message spoken by a highly respected pastor with an impeccable reputation.

History knows “Pastor Bernie” as Bernard of Clairvaux.  The year was 1146.

The church took up arms and marched off to fight a war.  We call it the Second Crusade.

It was an absolute disaster.

Not only did the military objectives fail, but Jewish communities living along the Rhine were slaughtered along the way.  Unthinkable atrocities were committed in the name of the Christian faith.

No one was more horrified by the outcome than St. Bernard. But it was too late.

History’s judgement of the actions of those Christians has been harsh.

Outrage seldom builds Christ’s kingdom.  Responding to injustice by injustice, only multiplies injustice in the earth. Anger and frustration are not nearly as capable of leading the Church as is the Holy Spirit.

As James, the brother of Jesus said,  “My dear brothers, take note of this: Everyone should be quick to listen, slow to speak and slow to become angry,  for man’s anger does not bring about the righteous life that God desires.”     (James 1:19-20) 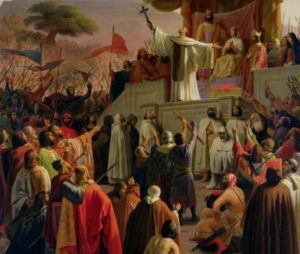 About the Author: Jon

Jon Hamilton is a broadcaster, author, and minister. He serves as President of Christian FM Media, which provides creative content to more than 200 Christian radio stations across the US and overseas. A father of eight, Jon and his wife Tammye frequently speak at conferences and churches.